The automotive industry is expanding its business in United Kingdom which will offer a lucrative market for automotive coolants over next five years.

Why do we need coolants? Basically, coolant is the fluid that goes through a motor to keep it inside its right working temperature. Mostly fluid coolants are being used by the current vehicle owners. The coolants prevent overheating and to maintain PH level. Coolants provides higher thermal capacity, non-toxic, anti-corrosive and low viscosity properties that make it fit for several heating, ventilation and Air conditioning (HVAC) applications.

Why you must use coolants in your vehicle:

U.K. Automotive Industry at a Glance 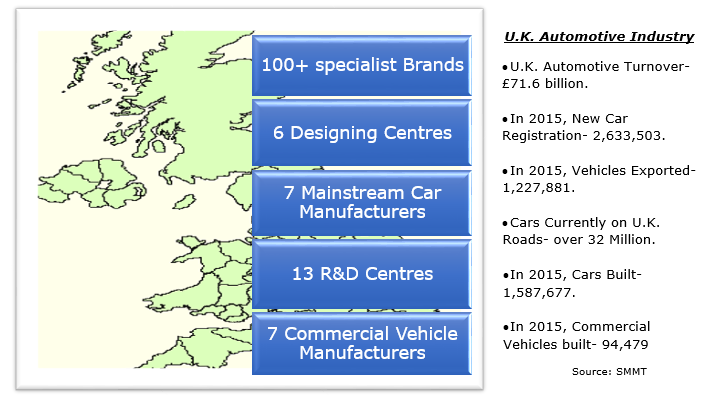 Increase in per capita income and continuous economic growth in the country are key drivers for the automobile market, which would in turn drive coolant demand in the OEM (Original Equipment Manufacturer) market. Hence, growth in automobile coolant market is directly related to growth in the global automotive sector.

Medium & Heavy Vehicles use substantial amount of coolants for cooling their engines. The booming automobile sector in United Kingdom is contributing significantly to the demand for automobile coolants in the country, and is therefore encouraging coolant manufacturers to increase their production capacities in the country.

According to SMMT, the automotive industry in the United Kingdom is expected to produce more than two million cars annually in the coming five years. The country is supported by the OEMs such as Bentley, Jaguar, Land Rover, Lotus, McLaren, etc.

Increasing urbanization and rapidly growing infrastructural development in the country, in turn led to increase in sale of automobiles and subsequently leading to larger fleet size. Moreover, the demand for coolants is generated from the aftermarket. Growing number of vehicles production and sales, growing technological advancements and environment friendly vehicles boost the demand of automotive coolants in the country.

Conclusion: The United Kingdom automotive coolant market demand is expected to grow at a CAGR of over 4 in 2022 on the back of technological advancements, usage and application across automotive and heat exchangers. Automotive coolant being a replaceable product, has a great potential in the aftermarket also. Improvements in the economic conditions of country have changed the financial statuses of consumers, which in turn is increasing the demand for automobiles, especially passenger cars. Also, the growing demand for LCVs in U.K. is boosting the growth of the automotive coolant market.