Scotch Whisky is one the phenomenal that has extended its reach across the world. It is an industry made of all type of businesses, which includes family owned company, small brewers establishing in the market to big companies that have been extending their presence by exporting their products across the globe.

Scotch Whisky is distilled spirit made from yeast, water and cereals.

Scotch whisky regulation of 2009 require every scotch whisky manufacturers to clearly state and display the relevant category sales description. For example, single malt scotch whisky or blend scotch whisky. Another requirement is to prevent the misleading labeling of scotch whisky also protect the use of regional names and regulate the use of distillery names.

Scotch whisky, which are exported must also comply the relevant labelling rules of the country. For example, in the European countries the liquid measure in the bottle content is 70cl and strength 40% Vol, all the information must be stated on the label also with the name and addresses of the bottler, seller or the producer. 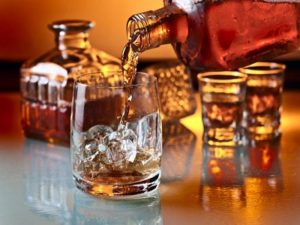 Diageo was formed in 1997 by merger between United Distillers and International Distillers & Vintners. Diageo is one the leading premium drink producer in the world and with headquarters in London. The brand portfolio of the company includes Johnnie Walker, Bells and J&B among others. They also include product line called classic malt, Hidden Malt and Distillery malts.

Paris based company Pernord Ricard is the second largest producer of scotch Whisky in the world and grown tremendously through many series of merger and acquisition. The group’s activities are mainly focused on main key brands, which represents more than of the profits. The companies a main motive is to premiumise their products rather than driving volume sales. The group’s key brands include 100 pipers, Ballantines, Chivas, Clan Campbell and Passport.

William Grant & Son a family owned business and producer of scotch whisky is headquartered at Scotland. The company has been producing Glenfiddich Whisky since 1887. The company is now largest whisky distiller in Scottish whisky industry. Since 2002 company is marketing its produced spirits such as rum, gin and Vodka. The company stores its product in Belldshill located at North Lanarkshire, Scotland. The distribution network of the company includes joint venture, Wholly owned subsidiaries and third-party distribution. The companies brand portfolio includes key brand such as Grant’s, Clan, Scottish Collie and MACGregor, Glenfiddich and Balvenie.

Edrington Group is a known producer for scotch whisky across the world under Scottish ownership. The group is owned by a the Roberston Trust a charitable organization. The group now produces over 60 types of different whisky products, which includes key brand such as Cutty Sark, Famous Grouse, Highland Park and Macallan. The group has also acquired majority stake in Brugal Company to increase product portfolio by introducing rum.

Even with growing popularity of U.S Whisky’s like Tennessee Whiskey and Bourbon in United States and abroad, the demand for imported whiskey continues to see growth. According to Distilled Spirits council of the United States import the value of imported whiskey increased by 2.6% to USD1.7 Billion in 2014, in comparison to growth rates of 16.5% and 12.3% in 2013 and 2012.

In United States alcohol market, spirit industry holds 35.9% market share, beer 47% and Wine 17.1%. Volume for U.S Whiskey, which consist of rye, Tennessee and bourbon jumped to 6.8% with revenue up 7.7% to USD3.1 Billion in 2016. Volume were also up in the double digit for cognac, Iris Whiskey and Canadian Whisky but scotch whisky increased 0.5% for single malt and marginally decreased for blended whisky.

Conventional alcohol production practices rely on the use of chemicals to protect the fruits used in producing alcohol. These chemicals are harmful to the surrounding ecosystem, risk the health of natives surrounding corpse and livestock, local residents and surrounding waterways. Whereas practices used to prepare organic alcohol focus on health of the soil, structure of the ingredients and alcohol to the agriculture input. The physical state of alcohol, which is to be prepared are managed to minimize diseases and pest control. Global organic alcohol beverages market accounted for a revenue share of 7.00% in 2015, and is anticipated to reach 7.17% by 2021, as Many prominent players in global beverages market have started to launch organic alcohol products as it is the fastest growing segment in organic beverages market.

Alcohol is considered to be one the most beloved drinks in parties, celebrations and events. Increases in urbanization and rising disposable income are the key growth drivers of party culture in the developed and developing countries. With the increasing influence of Western culture and lifestyle, alcohol beverages are becoming an integral part of consumers life. However, heavy drinking or binge drinking over longer period of time can have very serious effects on health. As a result, major alcohol manufacturing companies are trying to cater to the changing demand of consumers by adding health quotient to alcohol products that are associated with addictive consumption and have started producing organic alcoholic beverages.